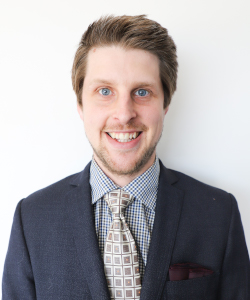 Joey Rewucki joined the TNYF in 2017 as a part-time instructor for the Winnipeg Jets Hockey Academy (WJHA). Since then, Joey has worked with the St. James Assiniboine Hockey Academy, coached minor hockey teams, and facilitates the goaltender sessions within the WJHA. In 2021, Joey transitioned into a full-time role as a WJHA Youth Advisor.

Hockey has always played a big role in Joey’s life, having played minor hockey with the Winnipeg Thrashers before moving on to play Junior A with the Selkirk Steelers and university hockey with the University of Manitoba Bisons. Following his playing career, he stayed involved in hockey as a goalie coach, and has coached at the Junior A level with the Selkirk Steelers along with running goalie camps throughout Winnipeg. Aside from being on the ice, Joey has found a new passion with tutoring and mentoring WJHA student athletes. He has helped to implement the after-school program and enjoys spending time at Camp Manitou.