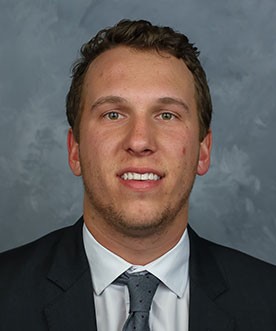 Thomas Nowicki joined the True North Youth Foundation in the fall of 2015 as an intern from the University of Manitoba. After his internship, Thomas continued to work part-time for the foundation, assisting with Hockey Academy, Camp Manitou, Project 11 and 50/50 at Jet and Moose games. In July of 2018, he transitioned to the role of Coordinator for the True North Youth Foundation. In this position, Thomas spends his summers at Camp Manitou, creating schedules for staff, rental groups and campers as well as assisting in administrative work. During the winter time, he splits his time between Camp, Hockey Academy, 50/50 and fundraising events.

Thomas earned a Bachelor of Recreation Management and Community Development with a minor in Psychology from the University of Manitoba. Thomas grew up with a passion for sport, playing tennis, golf and hockey.