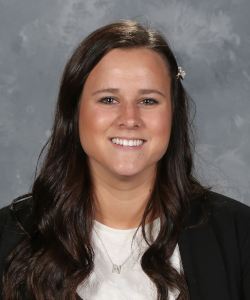 Having always been involved in sport throughout her life, Nicole joined the WJHA team in 2015. Bringing 10 years of volunteer coaching experience from all levels of ringette and hockey, she quickly assumed more responsibility and began working with the WJHA’s joint program, the St. James Assiniboia Hockey Academy (SJAHA). Officially joining the TNYF team full-time in 2017, Nicole’s role on the ice grew, coaching Peewee and Bantam girls teams through the WJHA, completing the Hockey Canada Skills Academy Seminar, and now becoming a head coach for the WJHA. She has also taken on the role of managing the TNYF social media accounts for the WJHA.

Nicole’s experiences in sport and recreation have been many. As a high school student, she was a member of the Westwood Collegiate hockey team, and traveled to Finland with the Manitoba Inferno hockey team in 2011. Nicole’s passion for travel and sport moved her to Banff, Alta. where she spent four years skiing and snowboarding, while working at Sunshine Village Ski & Snowboard Resort.