12 Days of Giving – Day 12: Giving youth the chance to chase their dreams and give back through the WJHA 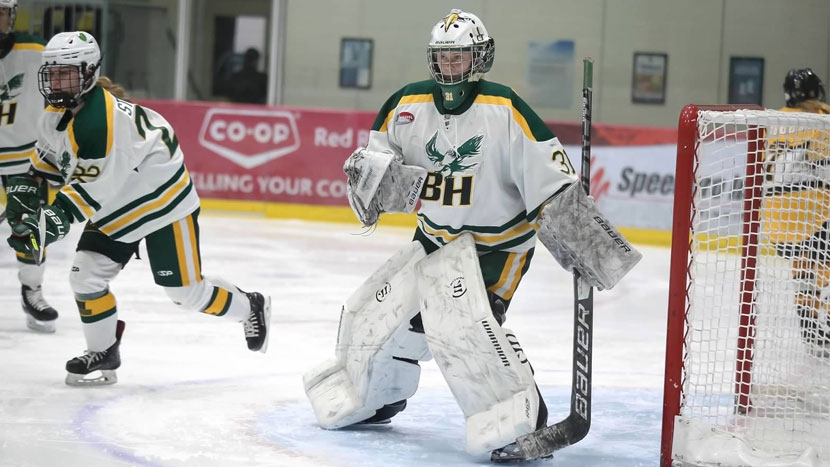 The holiday season is the season of giving for many.

For Winnipeg Jets Hockey Academy (WJHA) students, the holiday season is also typically the middle of another season – the hockey season. One WJHA student, fittingly named Christmas, is particularly missing the hockey season this year – not just for her own sake and the time she’s missing on the ice, but because the sport of hockey is her avenue to give back to the community.

Christmas is not just a WJHA participant; realizing how much the program has given her, she also volunteers her time to coach younger students.

WJHA Director Murray Cobb noted the impact she has already had on those she coaches.

“Kids in the WJHA, they know about Christmas – they see her at summer camp. When she was 13, she was volunteering for us,” said Cobb. “It was an eye-opener for the kids that at only 13 she was already volunteering with the WJHA – and she’s one of the best hockey players in the city. If she can do all sorts of cool things, so can they.”

For Christmas, now a 15-year-old goalie, it’s just one way of giving back to the program that got her invested in hockey in the first place. She started in the program in Grade 4, began playing goalie in Grade 5, and has been in love with the game ever since.

“In a normal year at school, she’s the kid that would grab other kids to go out to the outdoor rink at lunch hour and introduce them to hockey,” added Cobb.

That passion for the game has given Christmas more opportunities to get involved in the game and give back than just through the WJHA. In 2019, Christmas was encouraged by WJHA staff to apply to be a part of the NHL’s Power Players Youth Advisory Board which strives to have young hockey fans help advise the league on hockey-related topics important to their generation and to attract more youth to the sport of hockey.

“It sounded like a lot of fun,” noted Christmas of hearing about the program. “I wanted to get more involved with the community and reach out to more people who wanted to play hockey.”

Sure enough, Christmas was one of 15 North American youth accepted to be on the board. During the 2019-20 season, Christmas and 14 peers from around North America met numerous times virtually with executives from the league to discuss various initiatives, marketing strategies, and more.

“I’ve gotten to know all of these youth from different places who have the same interests as me,” said Christmas. “It’s cool to see other people who live and breathe hockey like me.”

For Cobb, the opportunity for Christmas to serve on the Youth Advisory Board is a prime example of the type of impacts the WJHA can make when students fully engage with the program.

“The Youth Advisory Board is a unique experience and there are only 15 kids in North America that are in this position,” said Cobb. “Our program has been the conduit to get our kids into these unique opportunities. You can look at opportunities in many ways – whether getting jobs or education through the WJHA. We’re with these kids from elementary through high school and it’s nice to see the avenues that can be opened up for them throughout their journey in our program.”

The Youth Advisory Board is just one example of an opportunity the WJHA has given Christmas – she also set a goal last year of attending Balmoral Hall School and making their well-known girls’ hockey team. The WJHA pushed Christmas to work hard both on and off the ice so that her skills in the crease and the classroom would give her the opportunity to attend Balmoral Hall and play for the team.

That hard work payed off for Christmas, who is attending Balmoral Hall this year and playing on the girls’ hockey team.

The pandemic has of course kept Christmas and her teammates off the ice for most of the season. That hasn’t dampened her passion for the game, but rather made her want to play even more.

In the one pre-lockdown start Christmas did get, an exhibition match against the University of Manitoba’s women’s team, she posted an impressive 45 saves – a true sign of all her efforts.

“Anything is possible,” said Christmas. “You just have to work hard, put your mind to it, and try your best.”

Become a game changer for youth like Christmas and give them the opportunity chase their dreams and give back to the community through the WJHA by DONATING TODAY!