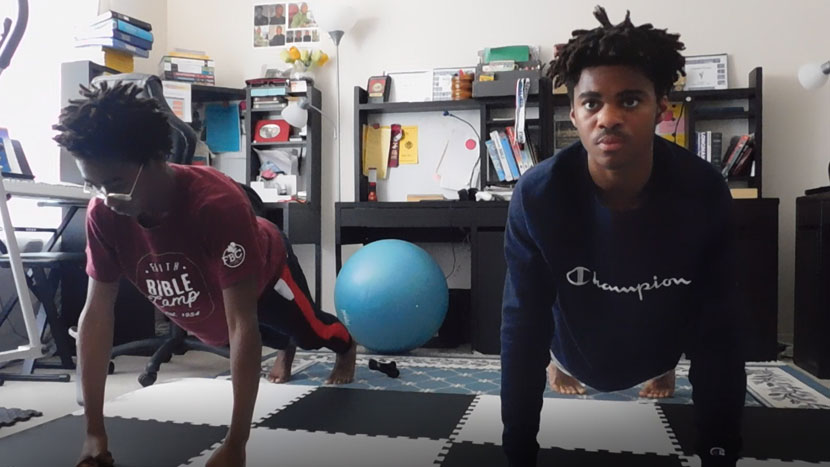 Winnipeg Jets Hockey Academy (WJHA) parent Ugo could barely believe what she was hearing. Ditto for her two sons, Winner and Divine.

Both boys were avid hockey players who learned the fundamentals of the game when they joined the WJHA in 2016. But that education was about to be taken up a notch after a nomination from Winnipeg Jets captain Blake Wheeler sent both Winner and Divine to the Subban Defence League’s Virtual Hockey Camp, hosted by New Jersey Devils defenceman, P.K. Subban.

“The boys thought I was joking,” said Ugo. “So, I showed them the registration emails from Subban Defence League Camp and watched as their jaws dropped in amazement.

“Having the names of two NHL pros in one piece of good news left them speechless, but not for too long because their conversations for the rest of the day centered on hockey, P.K. Subban, captain Blake Wheeler, and the Subban Defence League camp ahead.”

Having been a True North Youth Foundation ambassador for several seasons, Wheeler knows the impact the WJHA is having on kids like Winner and Divine. The program uses hockey as a vehicle to engage kids in their school community and provides the resources and encouragement that motivate them to excel academically and build confidence. Wheeler’s nomination centred around the fact that Winner and Divine would be highly engaged and take the most away from Subban’s camp.

The virtual camp took place in late July, with skills and drills sessions available throughout the day. The camp also offered Winner and Divine, who are 12 and 14 years of age respectively, the chance to take part in live dryland training sessions as well as live question and answer periods.

Asking the two boys to nail down their favourite part of the camp wasn’t easy.

“It was pretty cool to have a one-on-one practice with P.K. Subban right in my living room. Even though it was a virtual camp, it felt very real because I got to talk to him on Zoom,” said Divine. “My highlight of the camp week was getting to see P.K. and ask him some hockey questions during the Zoom meeting.”

Winner was a bit more into the fitness aspect of the camp.

“The joga sessions with Jana Webb was my highlight because the exercises helped me a lot,” he said. “I realized I needed to keeping working on my fitness so that I can play better and not get injured easily.”

Murray Cobb, the Director of WJHA, was thrilled the experience was a positive one for the boys. He’s seen them come a long way in three short years and feels that playing U15 AA hockey is a possibility for both of them.

“For them to continue on this path, they definitely need opportunities like the one provided by the Subban camp to not only improve their skills, but to see that they belong in the hockey community and can compete at the highest level,” Cobb said. “This is crucial for the boys considering the current push for social justice and especially, on a personal note for Divine, as he unfortunately dealt with racial slurs directed at him in a game this season.”

Summer camps like the one Winner and Divine attended help them stay active and, of course, sharpen their skills for the next hockey season. Cobb feels that Subban’s camp was especially important for lessons away from the rink as well.

“I hope they took away some of the larger lessons learned that everyone is equal and should have the opportunity to pursue their dreams,” he said. “I hope the camp opened their eyes to the fact that although hockey has room to improve, the sport is one that is taking steps to welcome players from all backgrounds.”

Ugo had a front row seat to watch her boys at the camp, which she said focused a lot on the fundamentals of the game and how they build the foundation for reaching the next level.

“He also reinforced some of the lessons my sons regularly receive at WJHA on the importance of maintaining healthy lifestyles,” Ugo said. “I hope that my sons learn that becoming a professional athlete does not happen magically. It takes a lot of hard work, perseverance, sacrifices, and determination. It requires consistency in little efforts made on a daily basis.”

That was heard loud and clear, said Divine.

“One of the things that I learned from P.K. Subban is that if you love a sport or any activity, you have to work hard at it every day and keep getting better and better,” he said. “Also, I learned never to ignore the fundamentals of hockey or any other activity you engage in if you want to get better at it.”