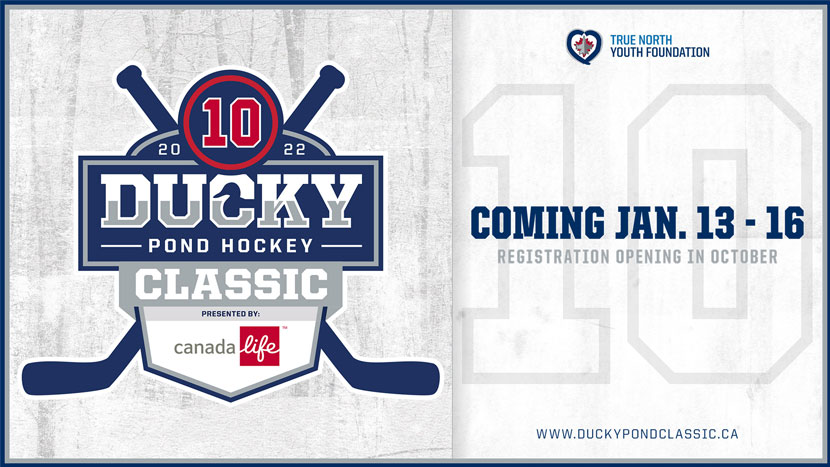 With the Winnipeg Jets marking 40 years since alumnus and Hall of Famer Dale Hawerchuk signed his first contract with the team at Portage and Main and one year since his passing, the True North Youth Foundation (TNYF) is excited to honour Hawerchuk and carry on his legacy with the first annual Ducky Pond Hockey Classic presented by Canada Life.

The Ducky Pond Hockey Classic presented by Canada Life will take place from January 13-16, 2022. Affiliated with the World Pond Hockey Classic, the tournament will be hosted on the new custom-made lake at Camp Manitou with the winner earning a berth in and trip to the Canadian tournament in Plaster Rock, N.B. The tournament provides an opportunity to celebrate the roots of Canadian hockey and the special community that surrounds this great sport – something Hawerchuk would be proud to be associated with.

“Dale has always been proud to be a part of the community in Winnipeg and felt very much at home in Manitoba. It meant so much to him during his battle with cancer to see all the love and support from his fans,” said Hawerchuk’s son Eric. “The Ducky Pond Hockey Classic is a perfect way to remember Dale. Some of our most cherished memories with him are playing pond hockey on Lake Winnipeg during the holidays with friends and family. There is something truly special about being on skates outside in Canada. This is going to be such a fun week and we are thrilled to be a part of it.”

In keeping with an event Hawerchuk would be proud of, the event will also give back to the community by supporting Hawerchuk Strong and the TNYF. More details on the tournament, including registration information, will be released over the fall. In the meantime, visit DuckyPondClassic.ca to sign up for the mailing list and be the first to receive news about the event.

“Dale was and always will be a role model to Manitobans, and his example of humility and kindness even under the bright lights of the NHL is something we hope to instill in the youth we work with every day,” said Dwayne Green, Executive Director of the TNYF. “To be able to honour Ducky with this tournament is a real privilege for us. I can’t think of a better way to remember him than bringing our community together to enjoy outdoor hockey.”

The foundation will also play its part in recognizing the Jets’ history as a whole. Partnering with Manitoba Public Insurance (MPI), the Winnipeg Jets and the TNYF will launch a new edition of Winnipeg Jets custom licence plates, celebrating the team’s heritage and featuring the Jets Heritage logo. Limited edition JH (Jets Heritage) and H (Heritage) series plates will be available, including motorcycle plates as part of the H series. The Heritage plates will be available at Autopac agents and MPI Service Centres across the province beginning Sept. 13.

Also in support of the TNYF, True North, along with Manitoba Public Insurance (MPI), will launch a new edition of Winnipeg Jets custom plates, celebrating the team’s heritage. Limited edition JH (Jets Heritage) and H (Heritage) series plates will be available, including motorcycle plates as part of the H series. The Heritage plates will be available at Autopac agents and MPI Service Centres across the province beginning Sept. 13. 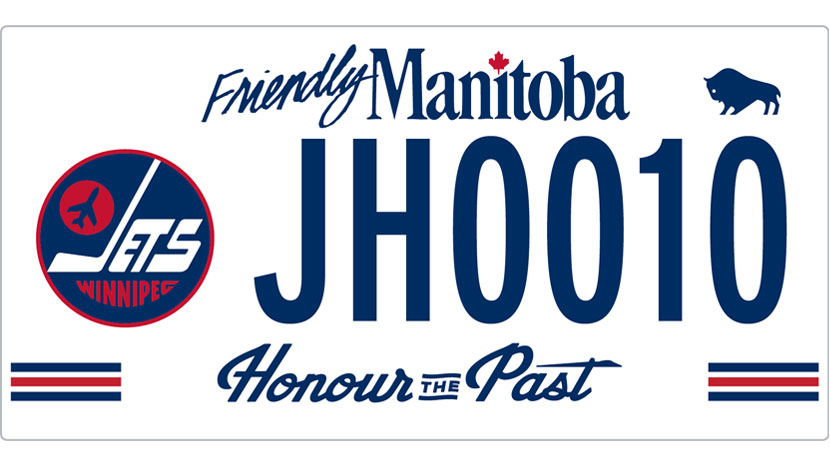 “The Jets Heritage logo, for us, is not only a great symbol of the team’s history in Winnipeg, but a visual reminder of the loyalty of Manitobans to our team,” noted Green. “We’re extremely grateful to see that same loyalty from MPI and Manitoba drivers to our foundation through the Winnipeg Jets Heritage plates, and we look forward to seeing the Jets Heritage logo on roads across the province.”

The Ducky Pond Hockey Classic and Jets Heritage licence plates are part of a group of initiatives that will see True North Sports + Entertainment and the Winnipeg Jets honour the history of the 1.0 and 2.0 teams as well as commemorate Hawerchuk’s impact on the community. Other initiatives include submitting an application to the City of Winnipeg to honourarily name Graham Avenue between Donald Street and Carlton Street – a two-block stretch in downtown Winnipeg adjacent to Canada Life Centre and True North Square – Dale Hawerchuk Way in time for the 2021-22 season and erecting a statue of Hawerchuk at True North Square in August 2022. The team is also making their Heritage Blue jerseys, first worn at the 2019 Tim Hortons Heritage Classic, their official third jerseys.