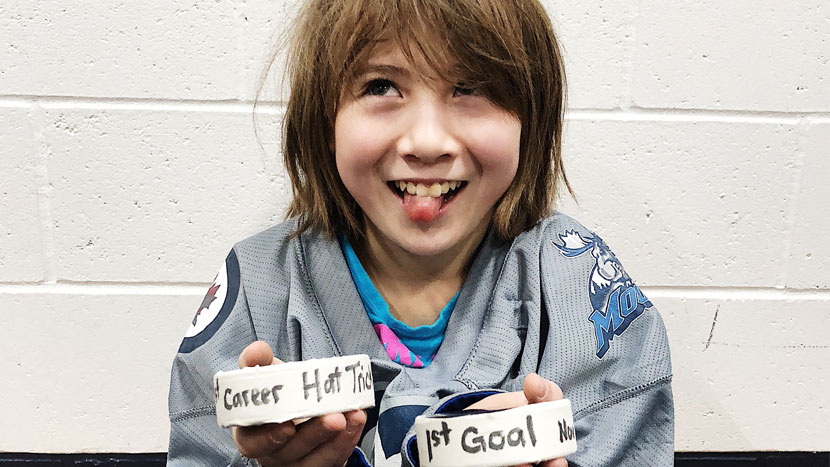 With minor hockey starting up again this fall, it feels like a homecoming of sorts for many young hockey players. Among those is River, a 13-year-old Winnipeg Jets Hockey Academy (WJHA) student who plays on the U15 Rockets A1 minor team.

Getting to go to rinks to watch River play again, Joanne, River’s mom, can’t help but feel the same way.

“Hockey rinks have become our second home; there really is not a lot of our life the WJHA has not touched,” said Joanne.

Not so long ago, those very same hockey rinks didn’t feel like much of a home for River. She deals with non-diabetic hypoglycemia, which can affect almost every aspect of life, and which has manifested as performance anxiety for River.

“In the beginning it was almost paralyzing,” noted Joanne. “Her first few hockey games, all she would do is stand in a corner and smash the puck away if it got too close to her because she was so anxious.”

Thanks to several years spent in the program developing relationships with friends and coaches, and having the chance to improve her skills on the ice, River is a long way from that now.

“The WJHA has made me so much more confident than I used to be. Now I can go on the ice without having anxiety attacks.”

That’s been obvious to River’s WJHA coaches. Despite her initial anxiety, River has stuck to the weekly ice times and after-school programing since joining the program in Grade 2. That dedication has paid off for her according to WJHA Coordinator of Academic Performance Jaclyn Fraser, who has coached River on numerous occasions.

“River’s confidence has grown so much throughout the years that it now reaches those around her,” said Fraser. “She is vocal on the bench and in the dressing room and uses her confidence to support her teammates. She does this by celebrating the successes of her teammates and by encouraging them during difficult times.”

That support that River shows to others is extending beyond the dressing room now too. She’s sharing her love of hockey with younger kids through the First Shift program as a volunteer coach, something that clearly wouldn’t have been an option prior to her WJHA days.

That opportunity means a lot to River. When asked what WJHA her coaches have taught her, she gave a simple answer that was very telling of the kind of person she is.

“My coaches have taught me to skate and how to coach, so now I can help teach little kids to play hockey.”

River isn’t simply focused on improving for her own sake – she wants to give back and help the next group of kids who are new to hockey have the same great experiences that she had.

“As coaches, we want our players to build confidence and find a passion for the game and for themselves,” continued Fraser. “River went from a young student who was brand new to hockey to this amazing, outgoing, and confident hockey player, and she is now taking the initiative to share her positive experiences with new hockey players and become a role model in her community. It is incredibly fulfilling to see the program come full circle.”

River is just happy that those on-ice opportunities are a possibility again, whether playing or coaching, after a year where hockey was sidelined for the most part. Joanne is glad to be back in their second home at rinks too, though a return to hockey season means their own home is busy once again too.

“More than a few of River’s friends from hockey seem to think that our house now belongs to them,” she added with a smile, noting their fridge seems to get raided more often now.

River’s anxiety is clearly not the same as it once was thanks to minor hockey, where she now feels right at home with her teammates.