12 Days of Giving – Day 6: Giving reward to those who least expect it 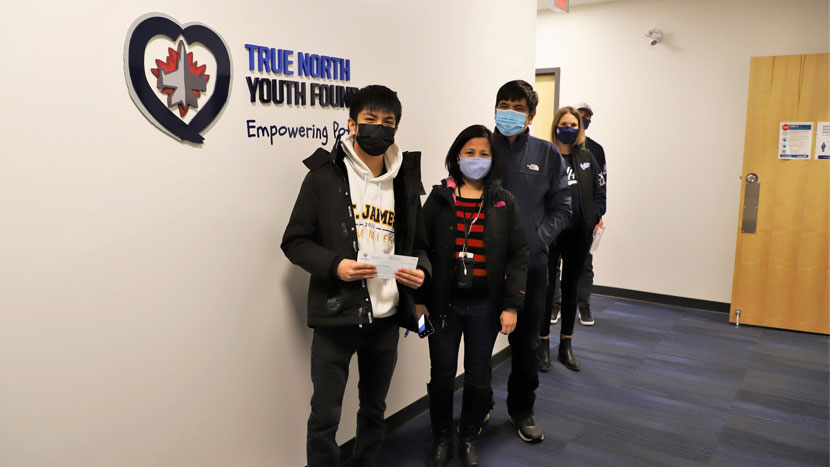 “The greatest benefits of the Winnipeg Jets Hockey Academy include opportunity and camaraderie.”

Those are the words of former Winnipeg Jets Hockey Academy (WJHA) participant Jersey, who is now in his first year of university.

Originally from the Philippines, the sport of hockey, among many other things, was a foreign concept to Jersey upon arriving in Winnipeg. As a new Canadian citizen, there has been no shortage of new opportunities presented to Jersey, who is now no stranger to the game of hockey.

Still, it wasn’t those experiences alone that made the WJHA significant to Jersey – it was the people who were there beside him through those opportunities.

“Those experiences are amplified by the great people who were there with me and became friends.”

Those sentiments are a perfect sample of the type of person Jersey is – someone who participated in all that the WJHA had to offer and gave back to the program, appreciating all the friends he made along the way and the opportunities he gained.

For Jersey’s mother, Janette, it’s been obvious how much the WJHA and the people there who have walked alongside Jersey have impacted her son.

“We’ve seen Jersey’s progress since joining the WJHA. He overcame being shy and timid, and he gained friends and mentors through the WJHA. With all the help of the available mentorship, Jersey has experienced many things which have brought out the best in him.”

Jersey of course credits the WJHA as well, not just for introducing him to hockey, but for giving him a network of people to rely on when he needs help.

“The WJHA has made my life easier by being a sort of support system,” he said. “If I ever needed something like tutor lessons for a certain class, I could easily rely on the WJHA to help me out.”

While the WJHA has certainly helped Jersey on his path, one particular TNYF donor was inspired by Jersey himself. The qualities of appreciating the relationships and opportunities of the program and giving back without expecting anything in return caught their eye. The donor, who wished to remain anonymous, wanted to donate a scholarship to the WJHA, and Jersey’s exemplary character inspired them to choose him.

“When I contacted Murray Cobb, Director of the WJHA, the idea was to help out a person that had benefitted from the program, but also was willing to give back to the program as well,” said the donor. “We wanted to do something nice for a person after they had done a lot of hard work to succeed without knowing that there was a reward for their effort before they started.”

Jersey, of course, was not only shocked but honoured to receive the scholarship.

Janette, too, was very proud of her son and extremely humbled by the donation.

“We are so grateful for their kindhearted generosity,” Janette said of the donor. “This is such a great help to Jersey’s university life and gives him even more reason to strive to be better. With this, Jersey’s been able to direct his focus more on academics, productivity, and inspiration.”

For the donor, though, the donation isn’t merely an aid for continued education – it’s an investment in and encouragement of strong character that they see as so important to have in our world.

“There is a quote in the book ‘The Psychology of Winning’ that defines character as the arduous pursuit of excellence without the guarantee of reward,” continued the donor. “I think what we were hoping for is that Jersey would see the scholarship as an unexpected reward for the display of character.”

In a program that spends so much time with its students from when they enter until graduation, it’s encouraging to see youth like Jersey displaying the type of character that the WJHA is trying to foster.

For the donor, this scholarship aims to further that message.

“Perhaps the most important message that we are trying to send to these young people is that while they have faced a great number of challenges at a young age, there are also a great number of good things that can happen as well if they apply themselves,” said the donor. “Certainly, all the great work that the foundation does for these kids is a prime example.”

The donor definitely isn’t the only one taking note of that. It’s obvious to Janette what a difference the WJHA makes in the lives of not only her kids, but so many others. The areas in which they can choose to apply themselves in the program are many, and they only serve to benefit from doing so.

“After-school programs, educational trips, and camps play an important role in a student’s journey towards their future,” continued Janette. “With all the support of the people behind the WJHA, it helps bring out the very best of everyone’s hidden talent.”

“Take advantage of the opportunities presented within the WJHA and they’ll try their best to help you as they did with me,” Jersey offered as advice to the next generation of WJHA students.

Whether that’s engaging in the hockey program, the tutoring program, or any other aspect of the program, if a student puts their heart into it like Jersey did, great things are bound to happen.

Follow the example of the donor to become a game changer for youth like Jersey and show them that their efforts and time in the WJHA matter by DONATING TODAY!