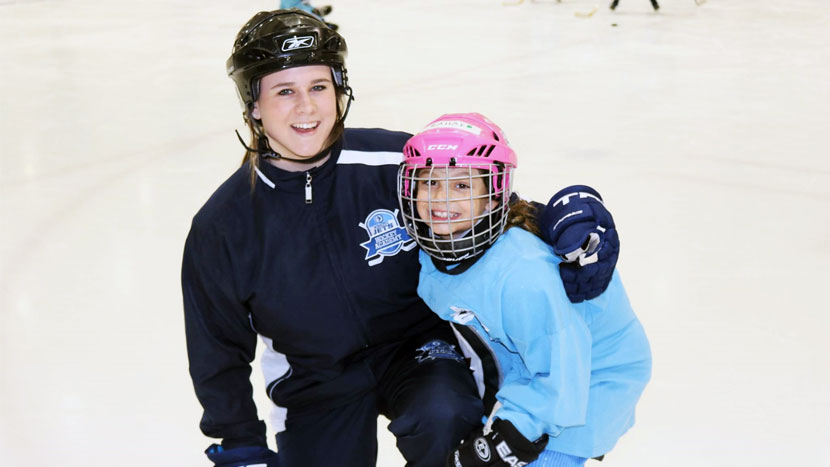 The difference between a good coach and great coach is all in the details – details that can make a world difference in a player’s life on and off the ice. Humility, compassion and leadership are among the details that the Winnipeg Jets Hockey Academy (WJHA) female coaches show and give to the student athletes they coach every day.

In recognition of International Day of the Girl on Oct. 11, and the NHL’s Girls in Hockey campaign running throughout the month, the WJHA celebrates its female coaches, Janelle Forcand, Camille Beauchemin and Nicole McAlpine who are helping to guide the way for the next generation of female hockey players.

Forcand decided to start coaching to give back to her community. Having had great role models and coaches while growing up playing hockey has inspired her to be a positive example to others. Forcand has been coaching with the WJHA for the last four years and enjoys sharing her skills and experience with the young girls on her female Atom team.

“To be able to help the girls overcome challenges and reach their goals is really something special,” she said, adding how rewarding it is to enjoy firsts and milestones with her young team.

The girls are not the only ones learning and growing. While the athletes gain confidence with on-ice session, Forcand is gaining confidence in her own leadership and in the decisions she is making as a coach.

Beauchemin has been the head coach for the WJHA female Peewee girls for the last four years following a whirlwind season as assistant coach when the WJHA first introduced its minor hockey program in 2015.

From losing games 23-0 to celebrating the first-ever WJHA minor hockey win, Beauchemin has had to compassionately lead her team through many situations and an array of emotions. She has taught her team that it’s not all about the wins, but about putting forth your best effort, working together, and becoming great teammates.

“Coaching and becoming a teacher was just a no-brainer for me. To watch the girls learn leadership skills and see how they interact on and off the ice with each other is so rewarding,” said Beauchemin, also noting the personal and character growth she has seen in her players.

Over the last 12 years McAlpine has been sharing her knowledge of the game with the younger generation. As head coach for the WJHA female Bantam girls for the past two years, McAlpine has been instilling the behaviours of good sportsmanship and teamwork, as well as conveying the importance of good character outside of the rink.

“To leave it all on the ice, behind the bench or in the dressing room is one of the best things to do as a coach,” said McAlpine also offering some coaching advice. “Bringing those upsets or frustrations away from the rink will only limit your coaching ability for the future.”

It’s always rewarding for McAlpine to see how her young players can also move past a tough game and, with smiles on their faces, lead and encourage each other.

“We have an outstanding group of female coaches who display strong leadership day in and day out with our young WJHA players,” said Alex Kampen, WJHA Minor Hockey Supervisor. “Their commitment to our female minor hockey teams has resulted in team and individual success and boosts the confidence of girls playing hockey in the community.”