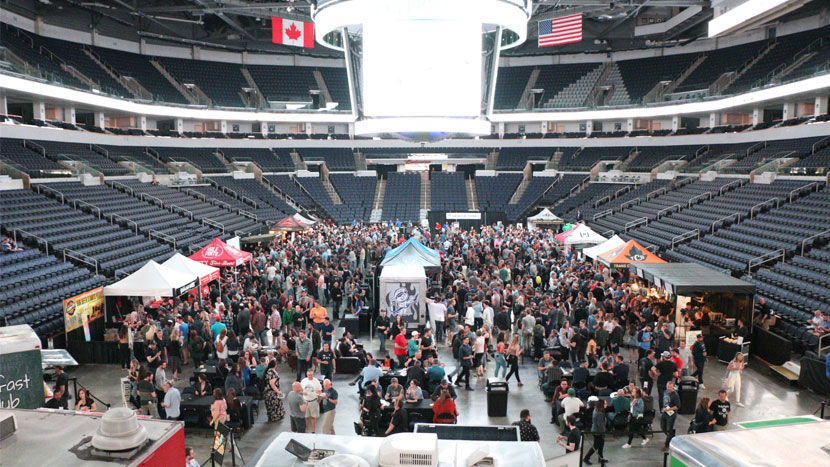 The 17th annual Flatlander’s Beer Festival presented by Manitoba Liquor Mart, in support of the True North Youth Foundation (TNYF) kicked off summer for more 5,500 beer lovers June 21. Participants were able to sample over 380 beers and ciders from around the world over two days at Bell MTS Place. Manitoba brewers remain a growing force and highlight for festivalgoers with 21 local brewers, up from last year’s 15, taking over ice level of the arena. Many local craft brewers had attendees flocking to their booths for specialty concoctions exclusive to Flatlander’s.

The always popular VIP Tasting moved from the Exchange Restaurant to the arena floor providing a new atmosphere for the 110 guests to mingle among the four food stations each featuring a local beer pairing. VIP patrons received a goodie bag, had the chance to win door prizes and enjoyed early access the 92 local products available for sampling at Manitoba brewers’ booths. As the VIP event once again sold out quickly, anyone wishing to take part in next year’s tasting should make a note to buy tickets early in 2020.

Additional Flatlander’s fun included the diversion of a photobooth – because if it’s not posted on social media, did it even happen? – as well as a TNYF games area where attendees could take a break from sampling to square off in bean bag toss and giant Connect Four while also learning more about the TNYF’s programs and positive impact on youth in our province.

The foundation extends a big thank-you to the organizing committee and student volunteers from the University of Manitoba, JDC West, and Shinerama for helping to make Flatlander’s a success. Since moving to Bell MTS Place in 2014, the Flatlander’s Beer Festival has grown in both attendance and proceeds, from raising $30,000 annually to a record-breaking $200,000 from the 2019 festival. The funds support the TNYF’s three programs: Project 11, Camp Manitou and the Winnipeg Jets Hockey Academy, which work together to empower Manitoba’s underserved youth.