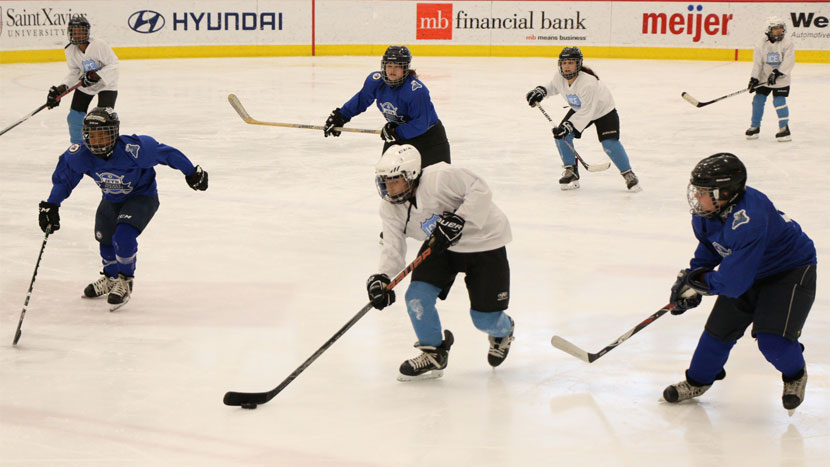 The Winnipeg Jets Hockey Academy (WJHA) brought 17 of its students to Chicago to reunite with friends from Chicago’s Inner-City Education (ICE) program from March 30 to April 2.

A three-day schedule packed with activities had the kids and staff on the move almost all day. Stops included the Museum of Science and Industry, a behind-the-scenes look at the Shedd Aquarium, a tour of the Chicago Blackhawks practice facility (MB Ice Arena) and team locker room and, of course, they took in the Winnipeg Jets overtime win against the Chicago Blackhawks in the United Centre.

The partnership between the two organizations began when Brad Erickson, Founder and Executive Director of the Inner-City Education Program, met Mark Chipman at the 2015 NHL Draft.

Erickson says he struck up a conversation with “a man who could not have been nicer. He was very down to earth and we got along very well.” According to Erickson, it was about 30 minutes into the conversation when he asked the man what he did for a living and only then did Erickson realize who he was talking to.

“Mark asked if we could work together and fly up some of our Chicago kids to Winnipeg and play a hockey game and show them around. We both share a passion for helping underserved kids and we both recognized the powerful impact hockey has on a child,” says Erickson.

Erickson says the kids had such a great experience in Winnipeg, “we wanted to return the favour and bring them down here to Chicago.”

Murray Cobb, Director of the Winnipeg Jets Hockey Academy, says the partnership with Chicago is a perfect fit.

“Both programs are really about using hockey as a vehicle to get kids attached to their academic lives. It’s about using an awesome sport to give the kids the social skills they need to do amazing things at school and to support them all the way to graduation and beyond.”

In between visiting the mainstays of Chicago tourism, such as the top of the Willis Tower and the world renowned Cloud Gate (The Bean), no trip to Chicago is complete without digging into some deep dish pizza for lunch.

The main event of the trip was the hockey game between the WJHA team and the Chicago ICE team. Each player was introduced skating onto the MB Ice Arena and the two teams played the second game in their annual series. The Chicago ICE team played their first game ever in Winnipeg one year ago and they showed significant signs of improvement. Crisp passes and slick stickhandling were shown by both sides and when the final whistle blew, the WJHA team came out on top 7-3.

Despite the win in their game and the Jets’ overtime victory, there were no hard feelings as the kids exchanged phone numbers and email addresses before heading home for the night.

For many of the WJHA kids, this was their first time on a plane and the first time visiting the United States. The Chicago ICE were incredible hosts as they showed us the best of Chicago and kept the kids smiling, engaged and making memories that will last a lifetime.