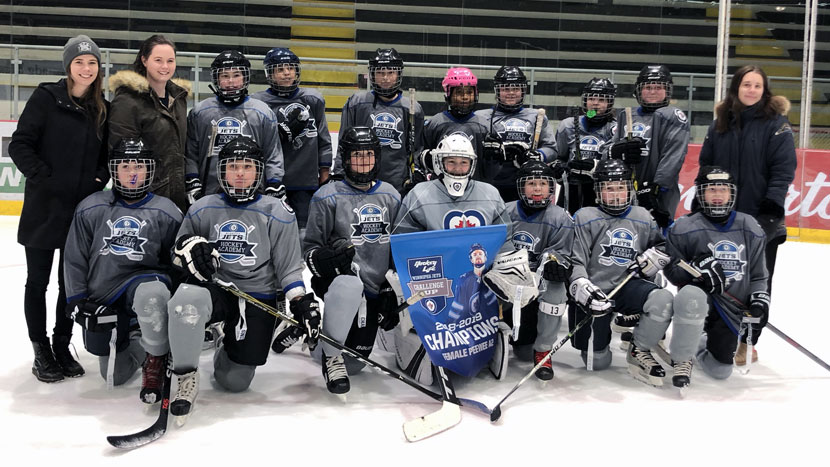 First big win boosts confidence on and off the ice

The Winnipeg Jets Hockey Academy (WJHA) prides itself on its impact on participants’ lives away from the hockey rink. It defines itself as a “play-based program designed to increase school attendance as well as high school graduation rates in socially and economically challenged schools in Winnipeg”. But that doesn’t mean they don’t have on ice successes too.

That was exactly the case in this year’s Winnipeg Jets Challenge Cup (WJCC), a tournament that has become a holiday tradition at Bell MTS Iceplex. The 2018-19 tournament, presented by Pro hockey life, was the eighth annual and hosted multiple divisions of teams at various levels of minor hockey at the Bell MTS Iceplex from Dec. 22, 2018 to Jan. 3, 2019. Always a much anticipated and memorable tournament, this year’s event proved to be an extra special one for a group of Female Peewee players from the WJHA.

The girls on the Peewee team, most of whom have been on the team for three years, have learned to play hockey during weekly WJHA on-ice sessions built into their school schedule. As their interest in the sport has grown, the girls were given the opportunity to join an extracurricular team and participate in the Challenge Cup with all costs covered by the WJHA.

The three-team division that the WJHA girls played in at the Challenge Cup proved to be quite competitive. With regulation and overtime solving nothing for both of their round robin games, the WJHA girls got to experience the pressure of a shootout, not once, but twice.

Player Precious Oryem, noted how great of an experience the shootouts were. The one-on-ones proved to be a little more nerve-wracking for goaltender Keyauna Robinson, but after stopping all 12 shootout shots she faced in the two round robin games and propelling her team to victories in both tilts, she gained plenty of confidence going into the gold medal game, to which the team earned a bye.

The finals didn’t require extra time though, as the team took down the opposing Stars White 4-2 in the championship game. For many of the girls, it was the first big win, and it proved to be a special achievement to celebrate together.

Cierra Courchene, another player from the WJHA roster could hardly contain her excitement and the awesome feeling of winning the tournament, and she already can’t wait to try to win it again next year.

“They worked hard every shift and gave it their all. It kept the parents and fans on their toes with the overtimes and shootouts,” said Janelle Forcand, WJHA Female Hockey Coordinator. “It was an exciting gold medal game and there was a lot of support in the stands. I thought winning the tournament gave the team a lot of confidence going into the second half of the season and it was a great way for them to become a stronger team as a whole.”

The players’ parents were extremely proud of the girls too. Not just for their tournament win, but for the progress they’ve made throughout the WJHA program.

“When (my daughter) started her first season, she was barely able to stand in her skates,” said Tara Starr, a mother from the team. “Her stick was how she balanced and the game moved faster than her eyes could follow. It truly is amazing to see how far she and her teammates have come since that first season. Winning the Challenge Cup was a wonderful reminder for the girls to continue working hard, stay focused and dedicated, and to never give up on themselves and what they want to accomplish.”

Originally published in Game On magazine